Basilea – During BaselWorld, the Watch and Jewellery Show which is held every year in Basel, a group of independent watchmakers, creators of unique and rare pieces are the protagonists of an ambitious project

A private expo during the most prestigious event in the world of luxury watches and jewelry in Basilea, SwissCreativeLab® will be the most exclusive satellite event of the BaselWorld2014 fair for the fifth consecutive year. It was the idea of Carlo E. Naldi to bring together a select group of independent makers of luxury watches; Naldi is Italian but Swiss by adoption and a lover of special watches and himself a maker of special writing instruments under the brand Edelberg Haute Manufacture.

The event will be held at the Ramada Plaza Hotel from March 27th through April 3rd: 380 square meters on 3 floors will contain a collection of unique, precious, and rare objects, most of which are limited edition. In addition to watches, there will be luxury pens, belts, items in precious animal skins, and jewelry. 19 brands are involved in the event, 15 of which are Swiss and 4 international; there are also 9 media partners and a social media partner. At the end of the event, a special prize, Writing Wrongs Award Edelberg, will be awarded to an ethically produced product that will go to PolioWatch this year.

It is an event that goes beyond the transient and becomes an exportable concept. For example, it was held in Tianjin in China in October 2013, a great success for SwissCreativeLab®, which will open a concept store in the fascinating Chinese “megalopolis” next June. 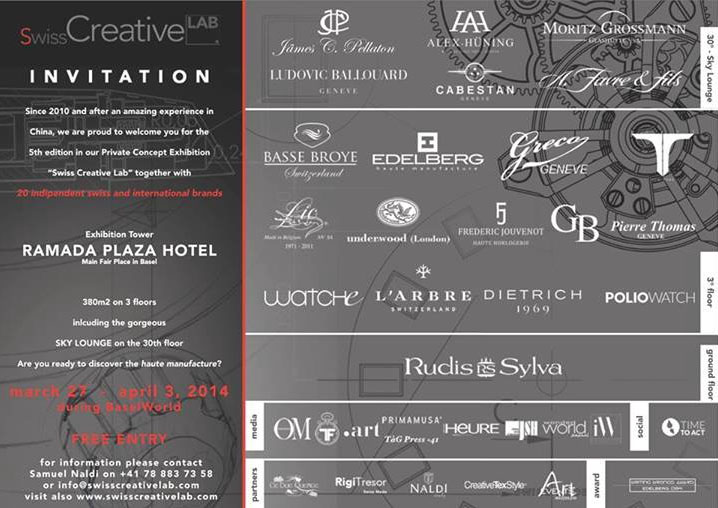