It was a wonderful inaugural evening, a unique event few passed up the opportunity to attend judging from the flood of guests, from the mayor Cortina d’Ampezzo to the regular visitors whose winter season opens with the early December holiday and connoisseurs of luxury wristwatches.
The sala degli Arazzi in Cortina’s Hotel de la Poste was filled with the excitement and fascination of the fine watchmaking on display, embracing the most important brands with the Comunicare il Tempo (Communicating Time) event, organised by Platinum Media Lab in collaboration with Bartorelli Gioiellerie.
The Corso Italia pedestrian precinct glittered in its finest evening wear, lit by Christmas lights and backlit totems with images of the brands on display. The overall effect was that of a fabulous open-air show that intrigued and informed visitors.

So it’s clear the Comunicare il Tempo exhibition was a resounding success. For the third year in a row it formed part of the Cortina Fashion Weekend, taking place from the opening cocktail party to the close of the exhibition on December 10, coinciding with the end of the long weekend holiday enjoyed in Italy to celebrate to the feast of the Immaculate Conception.

The exhibition was dedicated to the most important brands on the international fine watchmaking scene, including A. Lange & Söhne, Audemars Piguet, Breguet, Bulgari, Cartier, Hublot, Omega, Patek Philippe, Panerai, Roger Dubuis and Vhernier , which were present with their collections from Bartorelli Gioiellerie in Cortina. Magnificent display windows featured true watchmaking icons.
The elegance of the illuminated display cases opposite each House’s branded panels created the perfect choreography for the real stars of the evening, and the setting of the splendid sala degli Arazzi added an even more sumptuous appeal.

This year, too, Wonder Watches magazine, a 60-page special by Paolo De Vecchi, was distributed from the evening of December 8. This quality publication, reflecting the excellence all have come to expect from Platinum Media Lab, will be distributed as a supplement to Wonder Cortina Winter throughout the Ampezzo region during the months to come, until stocks run out.

Platinum Media Lab would like to thank sponsors Audi, Floating Life, Valmont, Valdo Spumanti, D’Auria and Hotel de la Poste, who all expressed confidence in the success of Comunicare il Tempo, as well as all those who took part and contributed to the success of the magnificent evening and the passionate enthusiasts who visited the exhibition during the two days that followed. 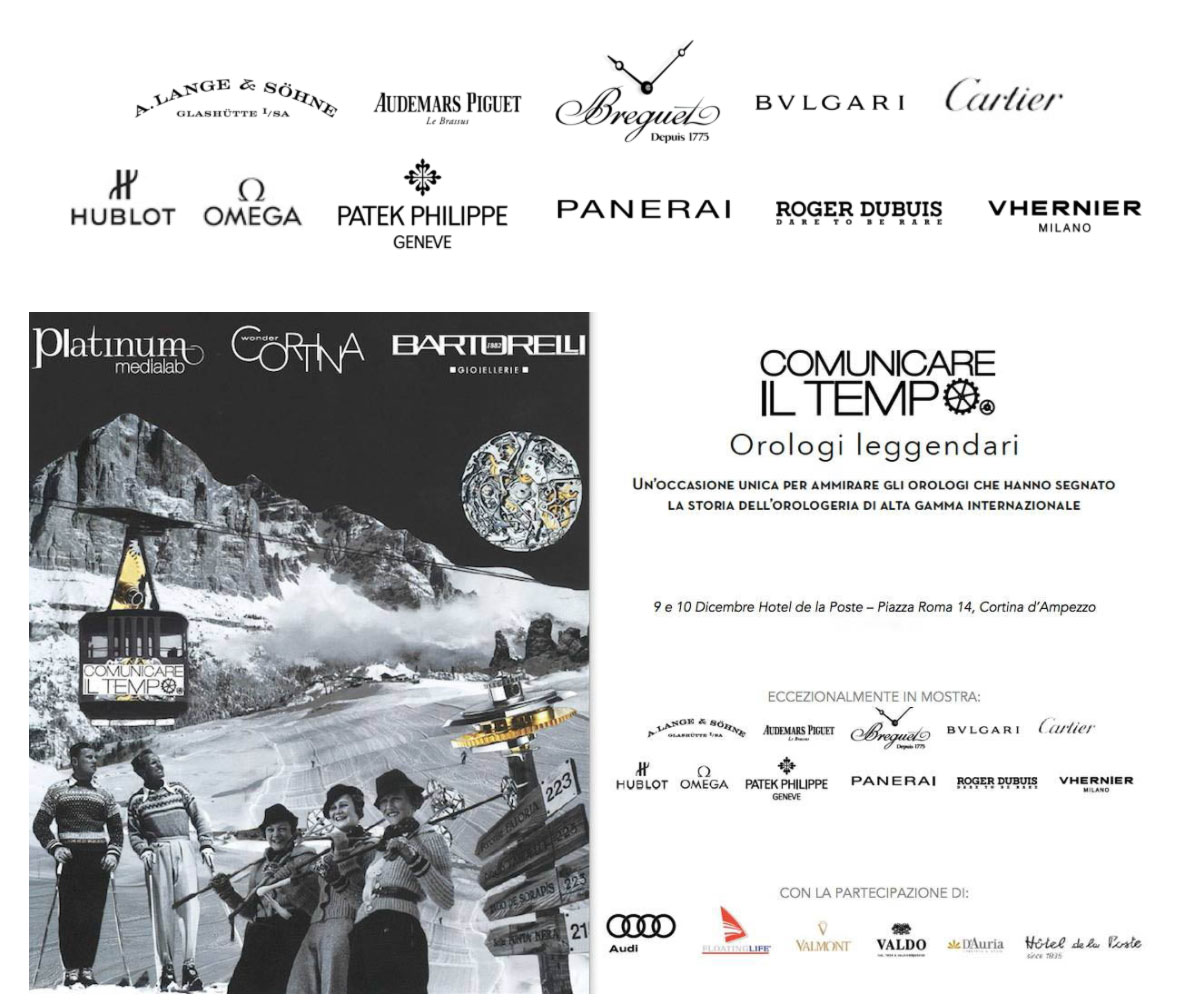